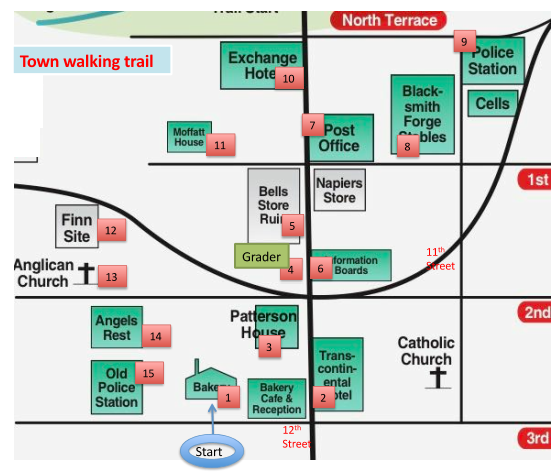 This is a walking trail for the immediate township of Farina. Rated easy, total distance less than 2 km. Duration 30 – 60 minutes depending on your specific interest in reading the information available at some sites.

Start from the Bakery (1) located on Twelfth Street. (Commonly referred to as Main Road)
First stop is across the road at the Transcontinental Hotel (2)
Now go back across the road to Patterson House (3)
A little further down is a plough & grader (4) The plough was used by the railways here. The grader came from Mulgaria Station when the Mahomets owned the station and apparently used camels to tow it. Story goes that they graded the road from Mulgaria to here and left it here as it was so rough.
Also on this side of the road there is information about The Mansfield and other General Stores. (5)
Back across the road to the Information boards. (6)
Continue along Twelfth Street to First Street. The Post Office is on the corner (7)
Turn right into First Street and you will come to the former Blacksmiths Forge and Stables (8) Check the display of old items. Continue on First Street and follow a track to your left, which is actually Eleventh Street.
You will see a stone building which was a former Police Station & Cell & Stable complex. (9)
You are now on the corner of Eleventh Street and North Terrace. Walk along North Terrace back towards Twelfth (Main) Street. On the corner is the Exchange Hotel (10) & adjacent a detailed story board.
Turn right when you get to First Street and continue until you reach another building known as Moffatt House (11) which is on your right.
Continue along and on your left is the site of the Finn family house (12).
From here you will see a track to your left leading to the Anglican Church site (13).
Continue on this track and you will approach another ruin known as Angels Rest (14).
Across from this site is the first Police Station for Farina (15). Previously there had been a tent site back near the campground for the first Mounted Constable.
Continue up this track (formerly known as Third Street) and you will arrive back at the Bakery.

1. Scotch Oven Underground Bakery built in the early 20th century. Restored 2010.
2. Transcontinental Hotel. Opened 1878 closed 1918. Sir Sydney Kidman converted it into a cottage and hospital. Used as a bush nursing hospital 1928 -1945.
3. Patterson House John `Gordie` Patterson moved to Farina in about 1920 and raised his family running the station living in an iron clad house. Rebuilt by the FRG, the original fireplace remains intact. Patterson`s lived at Farina until 1982.
4. Grader and Plough.
5. Bell then Mansfield General Store . Run by John Mansfield in 1855-1920 he also ran camel trains from this location. Bell family also ran a general store 1920 – 1967. Story-board contains a photo of a 1913 model T Ford & locals depicting fashion of the day.
6. Information boards
7. Post Office 1878 – 1960.
8. Blacksmith Forge & Stables
9. Police Station. Built in the 1890`s closed 1950`s due to flooding damage and Police were relocated to the new thriving town of Leigh Creek.
10. Exchange Hotel 1880 – 1937.
11. Moffatt House. Family home of Robert Moffatt. (Remnants of kitchen wood stove and slate flooring)
12. Family home of Nat & Lucy FINN & their 7 daughters 1889 -1944. View the square water tank with the daughters names still visibly inscribed on the side.
13. Anglican Church 1890 – 1967. View the original church bell stand & photos.
14. Angels Rest. Resident Celia Morris was a well respected and devoted Catholic. She provided significant support and shelter for the towns young women. She is buried in the cemetery with a significant head stone.
15. Old Police Station opened 1876 replacing the tent site by the creek.