What People Are Saying

How this page works…

We currently have a “comments” book that is available to visitors on site (in the Bakery sales marquee) so that comments may be left for us. This is somewhat limiting, as one has to actually be visiting the site to obtain access to the book!

We would like to make it much easier for people who are interested in what we’re doing at Farina to leave comments (either positive or where we’re seen to be moving in the wrong direction, suggestions on what you believe would be more appropriate.)

The easiest way for us to implement this scheme is for comments to be sent to use via the Webmaster on this site. If short comments are all that is appropriate, then they may be simply entered into the body of the message. However if you really get carried away, please attach your comments as a file (most word processors or text editors will be fine).

We’ll format your comments and add it to this page so that others can read your text and comment accordingly.

We look forward to hearing from you and through this page work together to improve the outcomes of all our projects in Farina.

A big job overall. Little steps are the only way. Incredible amount of time and money. The place has an amazing history which captures the imagination of many.

I’m a bit of a purest, replacing materials like for like. The Burra Charter has brilliant guidelines. Was a bit put back by the “new build” to replace lost building. But I can understand with time constraints and other factors that it was the only way to do it.

Seems like, fortunately, there is no limit to enthusiasm…fantastic!

Looking forward to helping in any way l can.  😁 😁 

( email to Kevin and Ann Dawes at Farina Station)

I just wanted to thank you very much for allowing us to camp on your property whilst on our “bucket list” trip to Birdsville and the Strezlecki Track.

I don’t know if you appreciate how nice it was to have somewhere safe and scenic to overnight , plus the luxury of a shower and flushing loo! The old town was so interesting and I also found your war memorial a moving experience.

I guess at times people might not always do the right thing by your generosity, but please be assured that I for one am truly grateful for your kindness. I hope to be able to return some day.

The Slater family were passing through Farina in one of 7 Kedron vans that appeared to be on a round Australia tour. She wrote:-

“We recently spent the night at Farina and the current volunteers asked if we had any nice shots to send them of the vans at the site.
We most recently lived in Bundaberg but my husband is on 2 years long service and so we have moved our “headquarters” back to WA for the present. Traveling in the van in the short term. Have been gone over 5 months now.
The group really enjoyed our time at Farina. Wish we had set aside more time to see the cemetery although we did enjoy the bakery very much.” 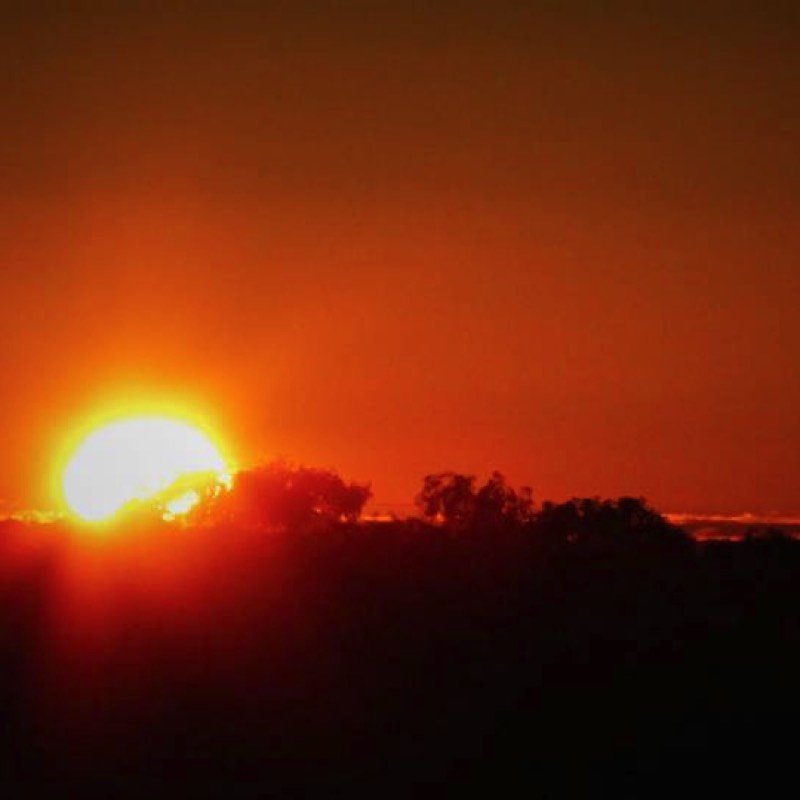 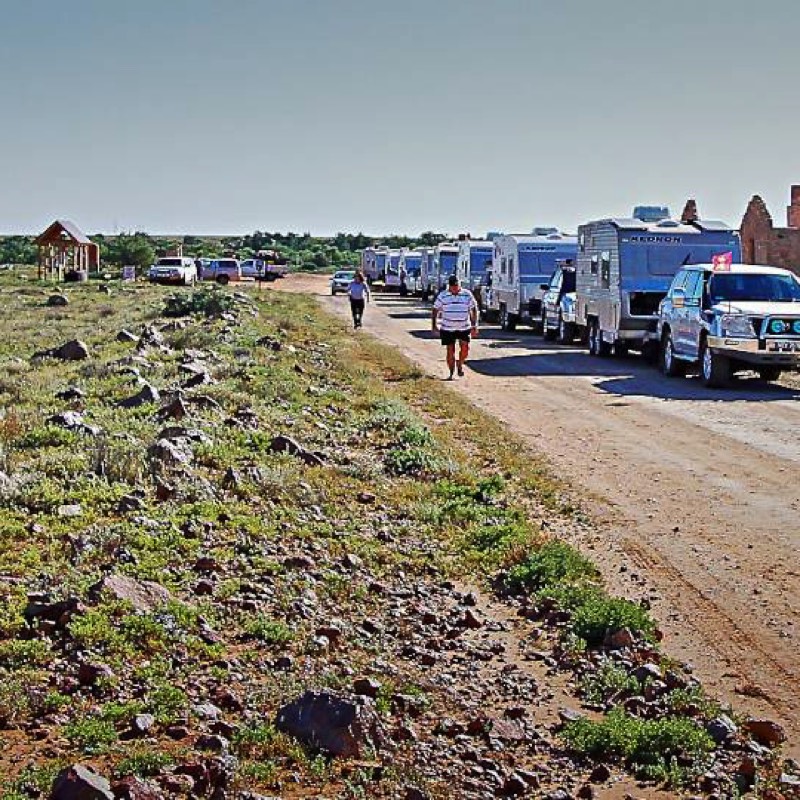 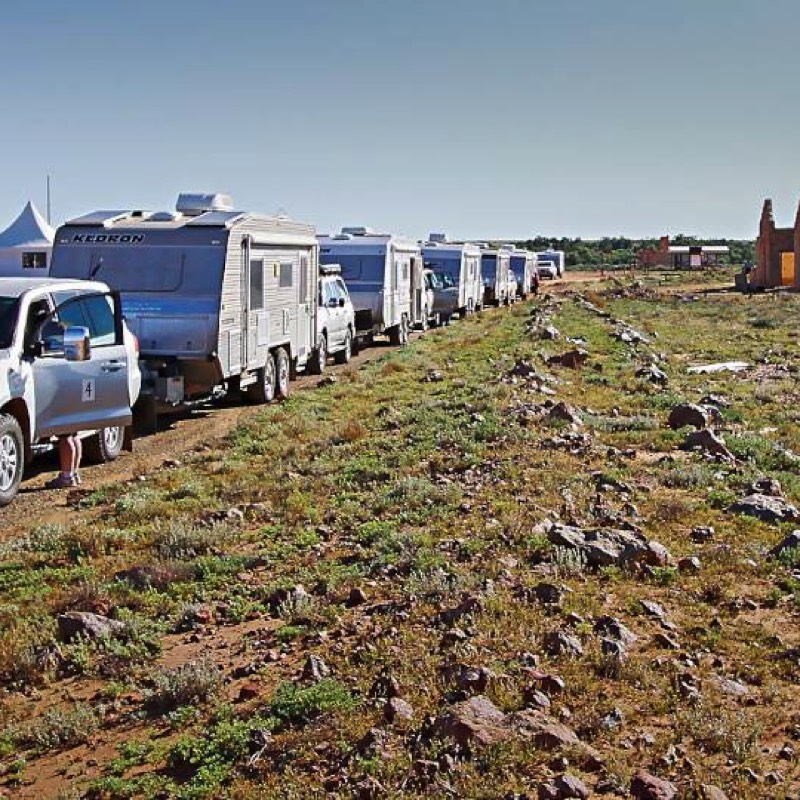 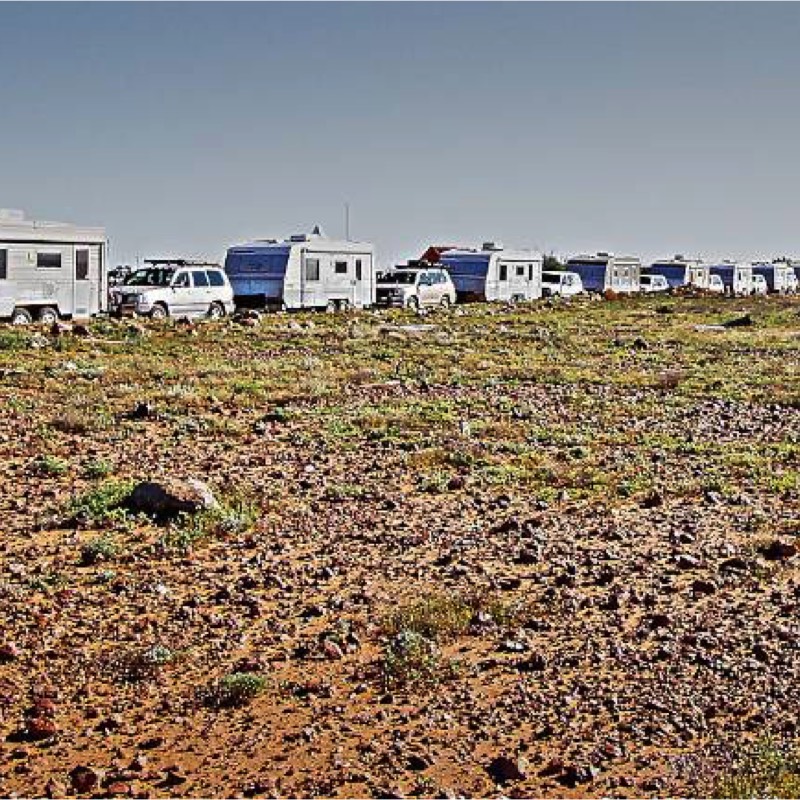 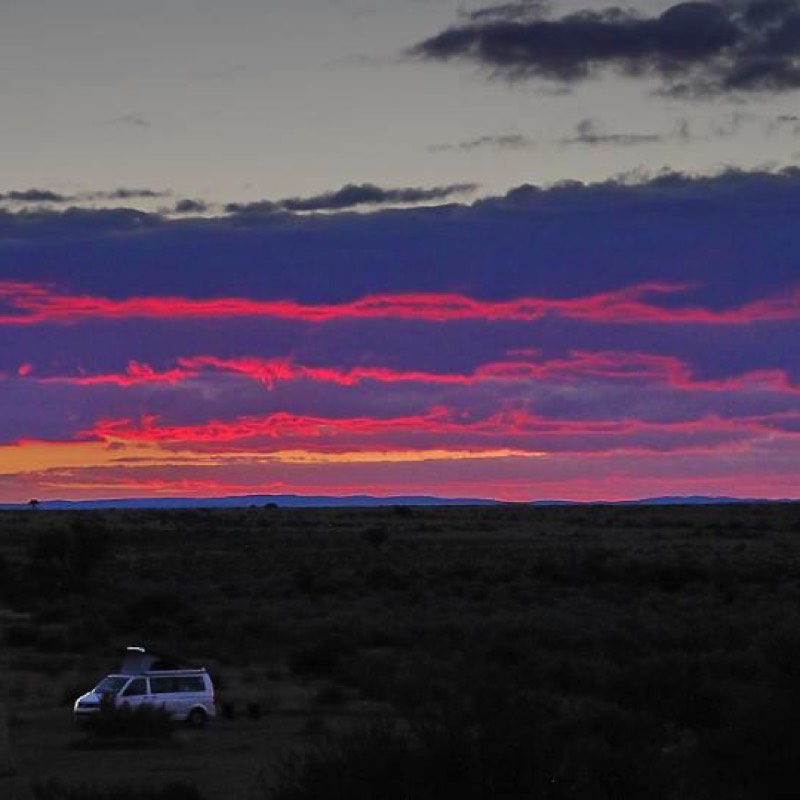 It was great to catch up with you and Dianna a few days ago, Marg and I had a wonderful time and were very impressed with the restoration work and the overall farina experience.

We have travelled on to Oodnadata and via the Painted desert to Kulgera where we are tonight, on to Kings Canyon tomorrow where I may be able to send this message to you.

Enclosed a little poem I wrote for our travelling companions which they suggested I sent on to you and the Farina mob,
Nice to see you again, now at Ayres Rock and off to the west. 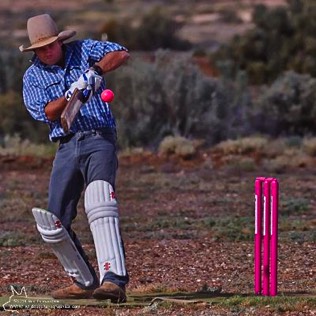 It was outback at Farina that a cricket match was played,
Where Farina V the World teams talents were displayed,

A record crowd attended, and under cool and cloudy skies,

Lunch was served before the game of home-made finger buns and pies.

The World team was a mixture of some who’d played a match or two,
The rest shanghaied or volunteered, to them the game was something new,
Umpires were selected, and with their counting stones in hand,
Staggered to the pitch to start the game, and at each end took a stand.

Farina’s team consisted of men and women off the land,
They took to the field undaunted by the pools of water, rocks, and sand,
Their casual reassurance was a worry, they carried with them cans of beer,
As their batsmen strode onto the pitch they gave a sort of leer.Their opener was resplendent in moleskins and big bush hat,
Long and lean and confident, and a dab hand with the bat,
He hammered runs around the field, hit balls up to the sky,
His team mates followed nicely and set the run rate high.

When the World team finally went in to bat it, was clear they were outclassed,
Their days of playing winning cricket was a memory long past,
Some say it’s not the winning, but the way you play the game,
But losing to Farina’s lot, well somehow it’s just not the same.

As wickets crashed around us we were stumped, run-out and caught,
Hit by balls in places that we never thought we aught,
We came off with cuts and bruises, but still with heads held high,
It wouldn’t do to let the locals see the World team cry.

Was it only 20 overs each, it seemed like much much more,
Today my body’s not the same, every muscle’s stiff and sore,
The game was played with passion, by no means were we disgraced,
Although we had the will to win, our talent was misplaced.