This family history has been kindly provided by Janet Christian (descendant of George and Mary Ann Symons).

WW1 Soldier Private Albert Gilroy Symons “Roy” – This story is to remember WW1 soldier Albert Gilroy Symons known as “Roy”. At the Farina War memorial stands 9 plaques commemorating Soldiers who died. Roy is one of these soldiers that are remembered. Roy’s parents worked on stations near Farina. 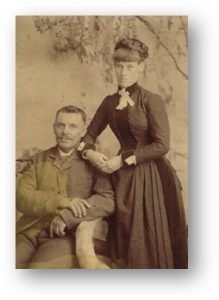 Roy’s parents George and Mary Ann had 14 children with 3 dying at a young age.  Their children were born at Blinman, Wilpoorinna and Avondale Stations (near Farina) and Leigh Creek. Their father George worked as an overseer on stations and also as a manager at the Leigh Creek Colliery. The Symons family were at Wilpoorinna and Avondale stations from 1884 to 1895. George and Mary Ann’s eldest child Rose Hannah Symons is my great grandmother. She is a sister to the brothers that went to WW1. She married William Place from Beltana and they also lost a son in WW2 in New Guinea. His name was Walter Gilroy Place (1918-1943)

All of George and Mary Ann 5 sons went to WW1 with Roy and Malcolm killed in Belgium and France. 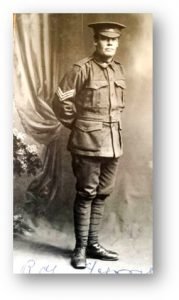 Albert Gilroy Symons known as “Roy” was born in 1887 at Wilpoorinna station near Farina. Before enlisting to the Great War, Roy was a stockman and a miner. He married Hilda May Richards in 1915 and their son Jack Gilroy Symons was born later that year.  Roy and his brother George “Harold” Symons enlisted at Farina in January 1916.

Roy was killed in the Battle of Passchendaele in Belgium October 12th 1917 aged 29 years. Albert Gilroy “Roy” Symons body still remains missing and he has his name on the Menin Gate Memorial in Belgium.  Sadly, his younger brother Malcolm was also killed the following year.

The extract from a letter below was written by Roy to his wife 3 days before he killed. Many soldiers kept a letter in their pocket in case they were killed, hoping the letter may have been forwarded to their loved ones. It was found by a German soldier who was then captured by the French. On his release, the letter was given to the German soldier’s sister who then sent the letter to Roy’s wife.

She received the letter over 3 years after Roy was killed.

I write this letter not because I think this hop over (as we boys call it in France) will be my last but accidents sometimes happen. If I am killed I want my last letter to go to my wife and baby. God bless you both and I want to tell you Hilda that I loved you more than I can ever show and though I have left you and Jack, it is because it seemed my duty and I am still of that opinion. If I have fallen it is what I consider a good cause and I have given my life first and foremost for my wife and child and whom I trust God will never see want. I have one of the sweetest and best little wife than any man could have.

Hilda darling, I hope you will never want sweetheart and Jack. My wish is that he should be put to a trade when he is old enough. I am writing this Hilda with a feeling that you will never have to read but it is a safe guard. Well darling I hope with all my heart to come through this stint safely and return to the arms of my loving wife who I worship and surely God will allow it to be. Now darling I will say goodbye and we will meet in some other place that the Great God has made for us. From one who has given his life for what he loves, his wife and child.

Your loving husband in life and death

Roy’s son Jack got himself a trade as a mining engineer. After working as the underground mining engineer in Broken Hill, Jack moved to Tasmania where he became a Director of mines. He was married to Helen and had 3 children. Roy’s wife Hilda was a seamstress and remained in Adelaide and remarried Harry Abbott, a WW1 digger.  In her final years, she moved to Tasmania to be with her only child and his family.

Roy’s brother John “Malcolm” Symons was a stockman and a miner before enlisting.  His 4 older brothers also fought in WW1. Malcolm was killed in the Battle of Amiens on 8th August 1918 aged 21 years. He was a driver so he was in charge of horses that pulled the guns. 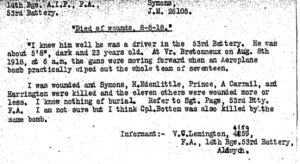 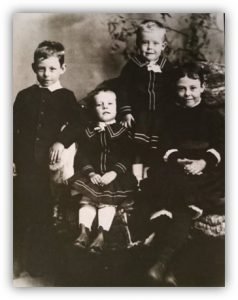 The 4 eldest Symons children in 1890. Photo was taken when the family were living at Wilpoorinna Station.

1901 Bessie “Eunice” Symons born 22nd August at Leigh Creek. Eunice married  Reverand William Allanson in 1931. (he fought in WW1) She was a Matron at the Quorn Hospital and was one of the first inland nurses for Dr John Flynn. Eunice died in 1993 aged 91.

In 1900 Ted had an argument with his father when he was 17 yrs old as he wanted to fight in the Boer war in South Africa and his father said no. Ted left home never to be seen by his family again.

The family searched for years to no avail even though they thought he went to Western Australia. Ted went to WW1 and received shell wounds and was gassed. Ted never married but died aged 87 yrs and is buried at Beverley in WA. A Geriatric patient at Beverley Hospital, he was affectionately known as “Pop” and was quite a character. 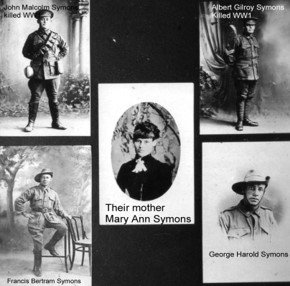 Photos in The Chronicle Dec 1917 of mother and 4 sons. They were probably unaware that Edward “Ted” also went to WW1.

John “Malcolm” Symons: Killed in Battle of Amiens and buried in France. Aged 21.