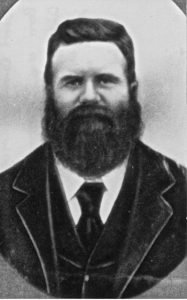 Robert Carruthers MoffatI2
b: JUN 1846
d: 8 JUL 1906
Biography
Robert Carruthers Moffat was born in Carlisle, England in 1846. He appears in the census there in 1851 and 1861, but not in 1871. The next record I have of him is his marriage to Rebecca Stanley Creek in St Paul’s Church, Adelaide on 3rd January 1872. Rebecca was born in Adelaide on 18th June 1852, just four weeks after her family had arrived at Port Adelaide on the “Anglia” from London. Rebecca’s family name was originally “Crick”, but this was changed to “Creek” in around 1863.

Robert died on 8th July 1906. His death certificate gives the location as “On road between Farina and Lynda Mine”, and the cause as “Supposed heart failure”. An article in the Broken Hill Barrier Miner on 14th July 1906 gives some details:
Barrier Miner (Broken Hill, NSW) Saturday 14 July 1906, page 3
TRAGEDY OF THE FAR NORTH
– Found Lifeless in a Buggy.
Inspector Clode, of Farina, on July 9 received a message from Mounted constable Smith (says the “Express”), who is stationed at the Lynda mine, to the effect that Robert Moffat had been found dead in his buggy on the previous day. As there were no suspicious circumstances surrounding his death, a burial certificate was granted.
The deceased was employed on the mine as a blacksmith and engine driver, and was regarded as a most useful man. He drove into Farina, which is about 20 miles distant, on Saturday to post a letter to Mr. A. Dawe, secretary of the Lynda mine, of National Buildings, King William street, and, from the fact that he was found dead in the vehicle, it is surmised that death overtook him on the way back to the mine, and the horses, knowing the route, brought his remains into camp. A son of the deceased is working on the mine, but the remainder of the family reside at Farina.
It is perhaps surprising under the circumstances that no inquest seems to have been held.