William Humphreys was born in 1820 in Liverpool, England.

In 1847 he married Frances Andrews in Adelaide, SA, and over a period of 28 years had seven children.

In 1876 he and his wife Frances and their daughter Sarah were sent by A.M. Woolridge to Government Gums (later to be named Farina) to take charge of the wells.

In 1879 he was tragically killed by a rogue bull at Farina, and was buried in the Farina Cemetery.

William HUMPHREYS had an ownership interest in the parcels of Farina land listed below.

“Farina, from Gibbers to Ghost Town” by Rob Olston – page 15. 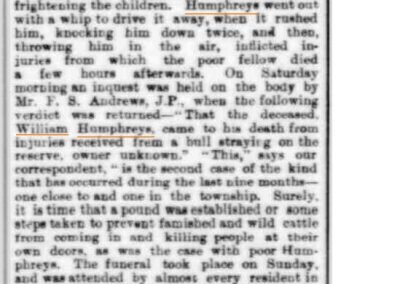