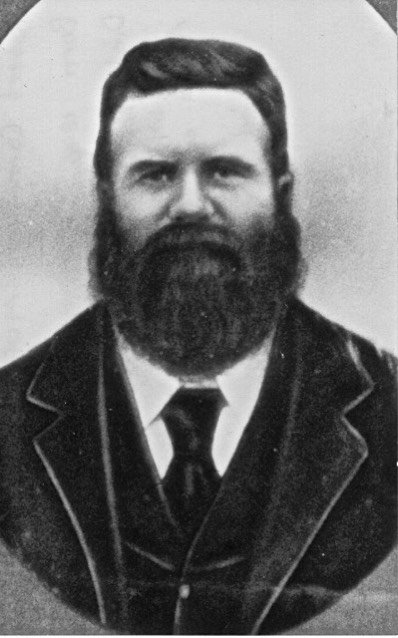 Some of you who have read Rob Olston’s books may have noticed references to Les Wise. The first edition of “Gibbers to Ghost Town” includes a couple of photos of Les, including one of him standing with his daughter Brenda in front of the old Moffatt house.

Les’s grandfather (my great grandfather) was the Robert Moffatt buried in the Farina cemetery, making Les my first cousin once removed. I have never met him or any of his family, and had assumed he had passed away (he was born in Farina on 27th September 1912).

I was therefore surprised to be told by an Aunt recently that he was still alive, and living in Aged Care home less than five minutes drive from me! She put me in contact with Brenda, and through her I was able to spend a pleasant Sunday afternoon with Les and his wife a few weeks ago.

While understandably frail, Les certainly had his wits about him. His family had left Farina when he was 4 years old, but he vividly remembered returning in 1922 while his mother nursed her mother Rebecca Moffatt (my great-grandmother) in the old Moffatt house. Rebecca died in October 1922. Les confirmed that she was buried next to Robert in the Farina cemetery.

I took with me some photos of the work that the group had done in Farina. Les was very interested in these, and also very appreciative of the efforts that people had put in to preserving the heritage of the town.

Sadly, Les had a serious fall two days after my visit, and died on July 6th – another link to the past gone. My one consolation was that I hadn’t put my visit off any longer.

Robert died on 8th July 1906. His death certificate gives the location as “On road between Farina and Lynda Mine”, and the cause as “Supposed heart failure”. An article in the Broken Hill Barrier Miner on 14th July 1906 gives some details:
Barrier Miner (Broken Hill, NSW) Saturday 14 July 1906, page 3

TRAGEDY OF THE FAR NORTH – Found Lifeless in a Buggy.

Inspector Clode, of Farina, on July 9 received a message from Mounted constable Smith (says the “Express”), who is stationed at the Lynda mine, to the effect that Robert Moffat had been found dead in his buggy on the previous day. As there were no suspicious circumstances surrounding his death, a burial certificate was granted.
The deceased was employed on the mine as a blacksmith and engine driver, and was regarded as a most useful man. He drove into Farina, which is about 20 miles distant, on Saturday to post a letter to Mr. A. Dawe, secretary of the Lynda mine, of National Buildings, King William street, and, from the fact that he was found dead in the vehicle, it is surmised that death overtook him on the way back to the mine, and the horses, knowing the route, brought his remains into camp. A son of the deceased is working on the mine, but the remainder of the family reside at Farina.

It is perhaps surprising under the circumstances that no inquest seems to have been held.

Rebecca was for a time the midwife in Farina, and continued to reside there until her death on 8th October 1922. Rebecca’s daughter Ruby Wise returned with her son Les from their home in Quorn to nurse Rebecca in her last days. I have a copy of a letter written by Les, stating that both Rebecca and Robert had headstones at the Farina cemetery. Rebecca’s has not survived, but presumably this was in the fenced double plot with Robert. Rebecca’s death is also recorded as Moffat, so it would be interesting to know what was recorded on her headstone.