Steve Playford writes that relics found are from a camel saddle

The two brass straps (above) were found amongst the ruins at Farina in 2010, One has inscriptions pressed into it. Their purpose was unknown for many years until a photograph (opposite) showed their use as straps to reinforce the joint in the wooden forks of a riding saddle for a camel.

Farina is 26 K North of Lyndhurst. once a prosperous community at the northern limit of settlement, it was a railhead with a population of 600 at its peak in 1882, connecting with an array of camel train routes. Years of drought, the closing of the gold and silver mines nearby in 1927 and re-alignment of the Ghan railway line during the 1980s forced the eventual abandonment of the town. 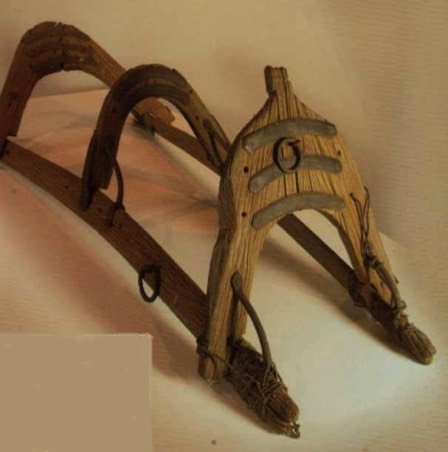 The straps form a pair, on opposite sides of the fork, and usually there were a number of straps at each joint.

The outer strap is punched with the words “Best Cast Steel – Warranted”, ” TAYLOR BROTHERS – ADELAIDE WORKS”, “Sheffield” and a crest (obscured by a rivet) over “ADVANCE”.

An internet search found that Adelaide works was in Sheffield, not South Australia, and that Taylor Brothers were toolmakers.

The crest is a sheep and a pennant, with “corporate mark” written over it. Possibly the straps have been reused from a discarded tool.

The photo of the saddle is from the book

Few relics from the era of camel transport, and their Muslim cameleers remain. It is fascinating to think of the frontier settlements that these straps may have visited.