Amos enlisted in the AIF on the 28th August 1914. He identified his birthplace as Farina, and his occupation as a Labourer.

On the 28th August 1914 he was assigned to D Company, 11th Battalion, 3rd Infantry Brigade 1st Division AIF, at the rank of Private, and records appear to indicate that he underwent training until the 1st January 1915.

On the 7th May 1915 he went ashore at Gallipoli as a reinforcement, although his time ashore seemed quite brief as he was admitted to H.M. Hospital Ship “Newmaskel” on the 1st June 1915 with a case of Measles. He was then transferred to Lemnos on the 2nd June 1915.

When recovered, he was discharged to duty on the 3rd July 1915, embarked en-route for the Dardenelles on the 4th July and rejoined his unit at Gallipoli.

His time back at Gallipoli wasn’t long before he was wounded by Shrapnel in the Right Thigh on the 1st August 1915, and transferred to a hospital ship on the 2nd August.

He was taken about H.M.H.S Gloucester Castle to Alexandria, where he was admitted to Number 19 Field Hospital on the 10th August 1915.

On the 19th August 1915 he embarked for England and his record shows him reporting at a base called Abbey Wood on the 4th December 1915.

After some time in England, he embarked for France on the 21st August 1916 and reported to base in Etaples. He later joined his battalion on the 4th September 1916.

On the 15th February 1918 he was discharged from hospital to his depot, and then embarked for the return to Australia.

The Farina land listed below was owned by Amos’s father, Charles Adams. There is no record of Amos owning land at Farina. 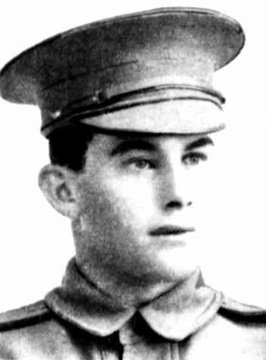