Donald Calbert Langley, who was known as Calbert, was born in November 1899 at Farina, South Australia. His father John Henry Langley was born in nearby Beltana and his mother Marianne Langley (nee Gliddon) was born in Village Wells, and married in The All Saints church at Farina in December 1895. Calbert was the eldest of four children, two boys and two girls.

In January 1918, he was transferred to Blackboy Hill Military Camp for initial training and was allotted to 28th battalion reinforcements.

In March, he embarked on HMAT “Ormonde” bound for Egypt and later on the “Ellenga” to Southampton en route to the training camp at Fovant near Salisbury.

At the end of August 1918, the unit left for France and, in September, Calbert became part of ‘B’ company, 28th battalion.

Following some three weeks of direct conflict on the Beaurevoir line, which effectively became the final battle of the war, the action ended on 3rd October 1918.

Private Donald Calbert Langley, service number 7321 of 28 Battalion, was killed in action at the Beaurevoir line, France on 3rd October 1918.

He was 18 years of age and is buried in the Bellicourt British Cemetery, Bellicourt, Picardie, France. 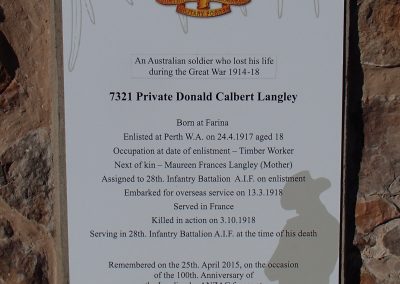 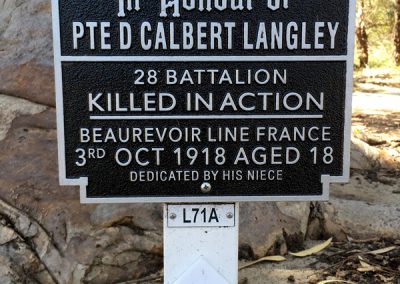