This year, a number of projects which impact on the Bakery/Marquee/Catering Van complex have been started.

Very early in the works year (around Anzac), Steve Harding began patching up the rougher spots in the concrete floor of the Marquee. As soon as the patches were dry, he began applying a very hard epoxy coating which was coloured to mask the red dust that is always tracked into the Marquee on boots.

The “Formacoat” and Epoxy coatings were supplied at no cost (valued at about $1800) by Top Line Paints of Adelaide. Steve was in the process of applying the first coat when I departed Farina on April 26th. 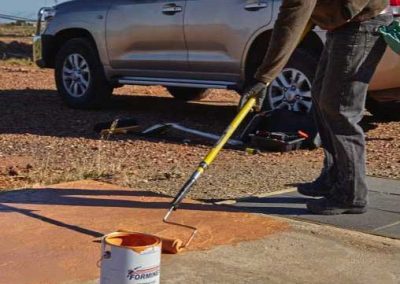 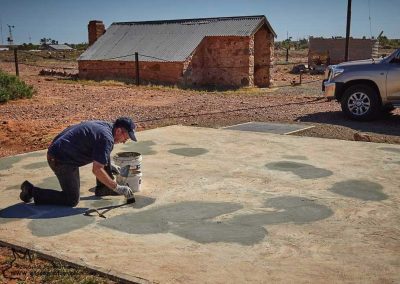 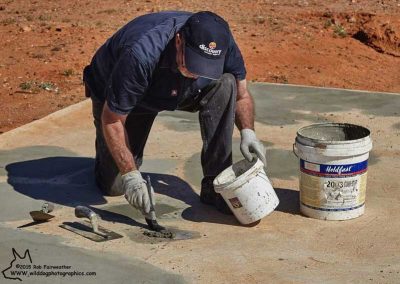 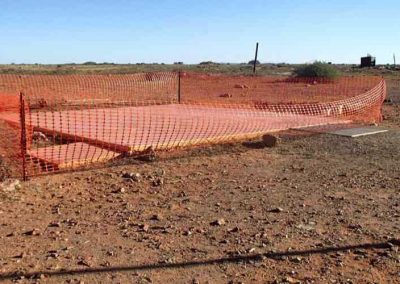 While all this was going on, Dennis Benson, all the way from sunny Queensland was preparing to upgrade the bakery oven.

While not looking like a high-tech setup, the original builders of the oven certainly knew a lot about thermo-dynamics. Unfortunately they were limited by the materials available at the time.

We’ve known for some time that our oven was a “hungry beastie”, and that we were losing a tremendous amount of heat from the top of the oven. Most people were not aware that the oven top (or dome) was out the back of the building, and because most times the earth at Farina is most often quite warm, the extra warmth around the back of the bakery was not noticed.

Dennis spotted this very quickly, and set about adding something like 30cm of insulating layers. As I understand it, after clearing away soil that had been heaped on the dome, he first added some mortar capping to the outer walls to bond in with the new layers. Next came a layer of aluminium sheeting to both reflect heat and allow for movement due to thermal expansion between the oven brick dome and the capping. This was then covered with 150mm of what he calls a “fondue” – a high temperature concrete – poured over the aluminium, and reinforced with steel mesh. All adding to the thermal mass and strength.

A thick layer (150mm) of vermiculite insulation was then added, and capped with a waterproof sealing layer.

Now at the same time, he noted that the oven fire was not “drawing” very well (we often had clouds of choking smoke in the bakery), so he added nearly a metre to the height of the chimney. Note the difference between the image showing the original rear of the bakery to the new capped insulation image. The new brickwork on the chimney matched perfectly with the old. 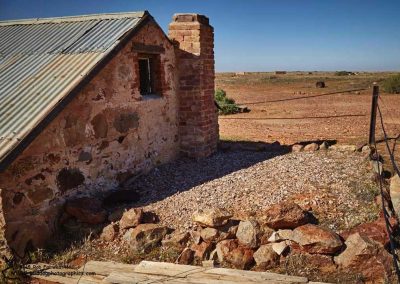 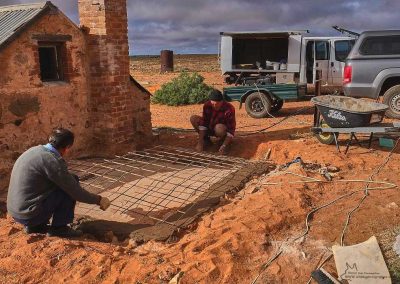 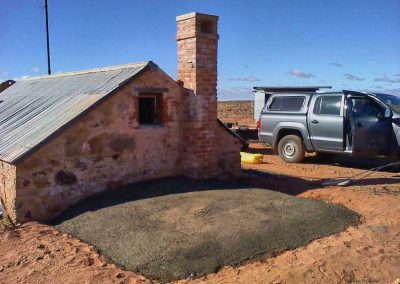 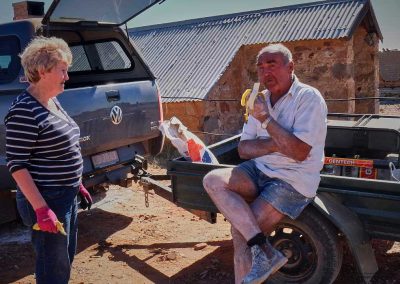 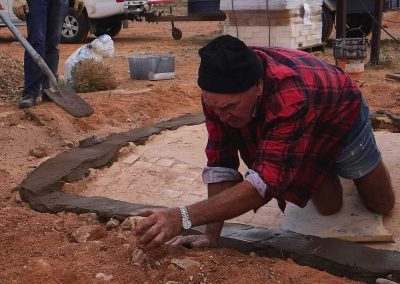 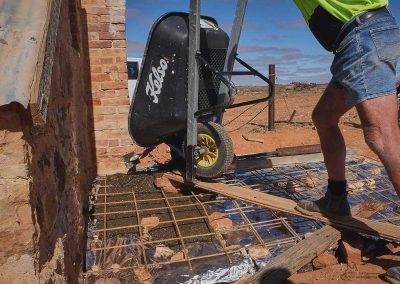 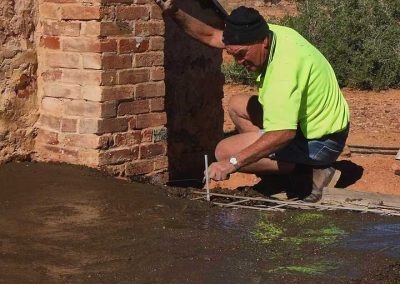 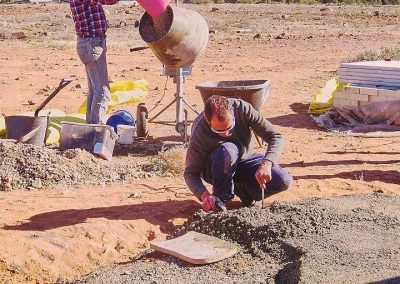 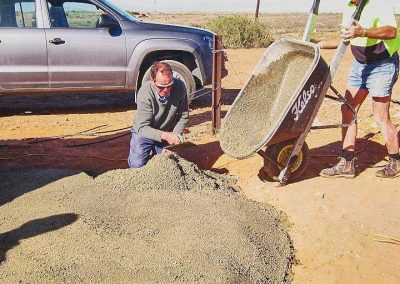 As one would expect, the brick lining of the oven and firebox, in well over 100 years, is going to have deteriorated in that time. Certainly the ceiling and walls of the firebox in closest proximity to the really hot parts of the fire had.

Dennis set about completely replacing the floor bricks and 35 to 40mm of sand under them. In place of the sand a 35mm layer of calcium silicate insulation sheeting was used to reduce heat loss below the oven.

The floor had become very uneven, and bakers have had a hard time moving product about, or removing it from the oven without damaging it.

One can see, in the last 2 images of row 1, new bricks are being laid prior to him working on the firebox walls.

Not only were bricks missing, or damaged in the firebox walls, but the low wall between the firebox and the oven proper were in a very poor condition. During the repair process, Hebelblock – a man-made fireproof “stone” was used to help to extend the life of this area of the firebox/oven.

The steel grating in the old firebox had been almost burnt away over the years, and so all steel needed to be replaced.
The last job was to give the front wall and the ceiling a fresh coat of lime wash. 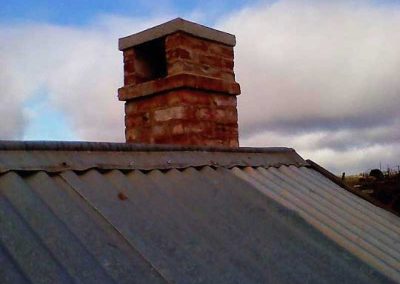 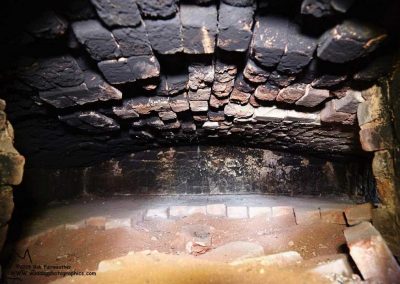 Replacing firebricks in the floor 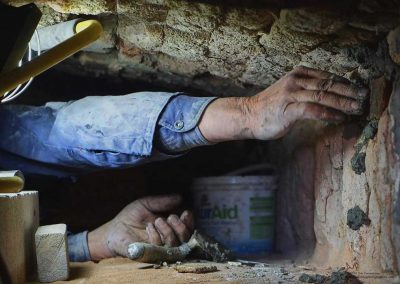 Replacing bricks in the firebox 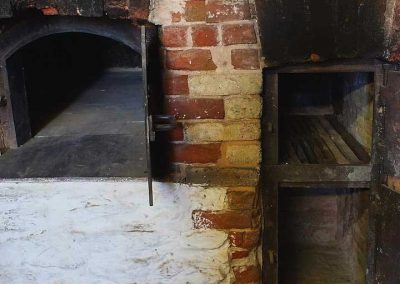 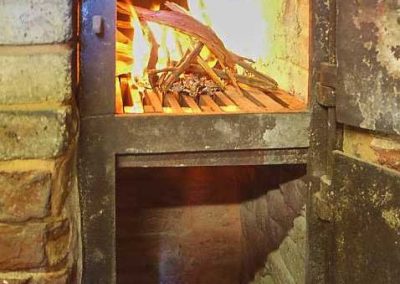 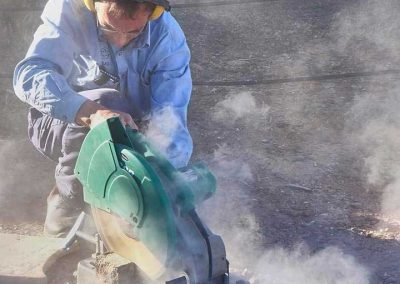 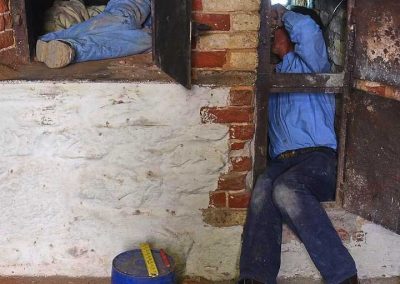 Dennis and Doug in the oven 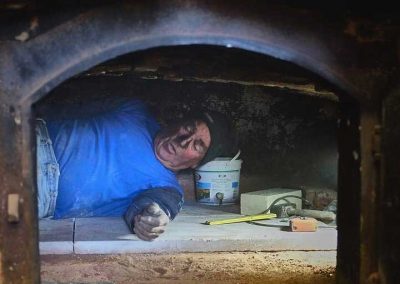 Dennis in the firebox 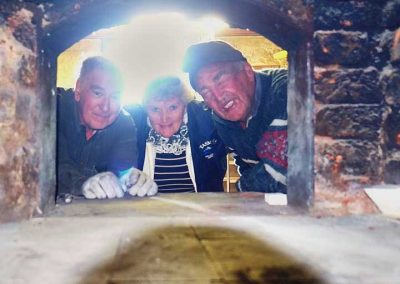 Nigel June and Dennis looking in

On the Western side of the Farina township, other great things were happening. On the Anzac day weekend, I spotted a large cleared area quite close to the Station equipment sheds. This, I was told, is the site of the new FRG equipment shed, housing the site office, workshops, and under cover storage for the catering van between the yearly works programs.

By the end the first week of the 2015 works program, a large channel had been dug from one side of the clearing to the bakery site some 200m to the East. The new large but silent diesel generator is to be located mid way along the cable run so that it is as far from any works location as possible, thereby further reducing environment noise levels for workers.

A big thankyou to Kevin Dawes for all the work that he has done with his own large grader (unfortunately damaged by large buried rocks in the process) for all this initial foundation earthwork.

As can be seen in the images below, there’ll be a large distribution board at the rear of the Marquee area to provide a local distribution point with all the required safety features. 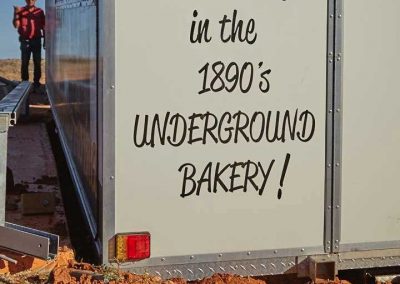 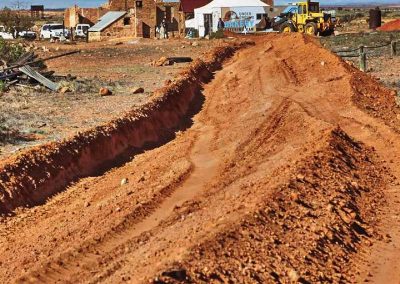 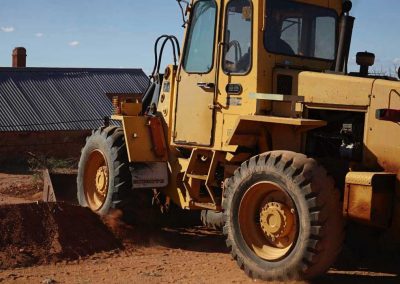 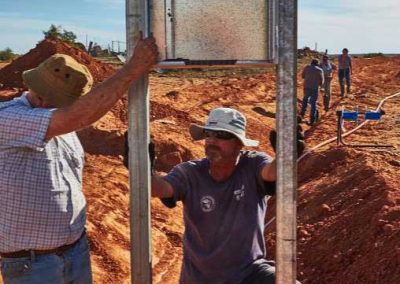 The distribution panel goes up 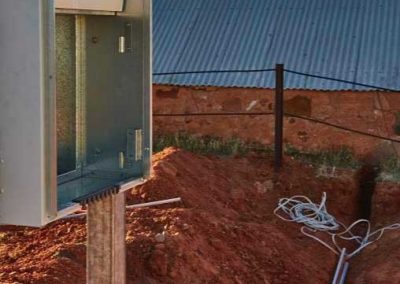 Wiring to the bakery 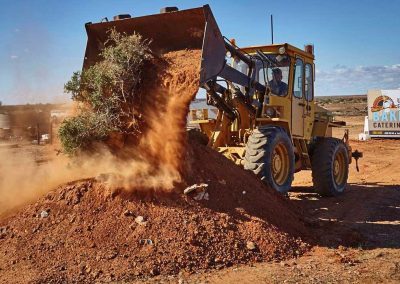 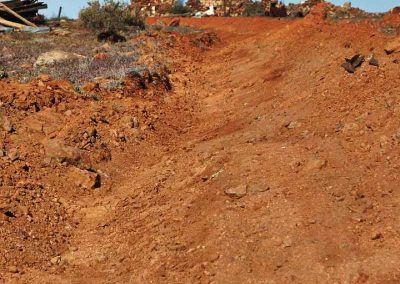 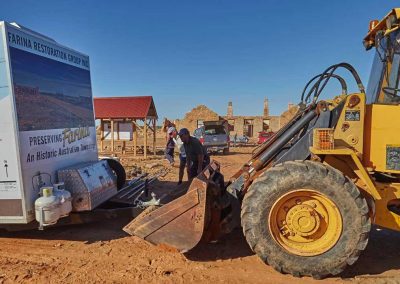