Back in 2011, I was subcontracting to Laucke Flour Mills in Strathalbyn, writing custom computer software for in-house remote reporting systems. During this time I was coordinating my design with Martin MacLennan, who was at that time, head of Quality Assurance for Laucke Mills.

During our many meetings and discussions, Martin was making the occasional reference to Farina. He became quite enthusiastic about a project there in which he was involved, and showed me a few photographs of the terrain etc. I did my own research, and came across a small web site that showed numerous “Senior Citizens” sitting around in the shade of rough stone walls, and most of the people wearing fly nets while trying to drink cups of tea!

To cut a long story short(er), Martin described what was actually going on, and invited me to travel with him and a couple of other mates, to Farina in 2012.

The more I learned about the project, the more I realised that apart from the valuable work that was being done at Farina, the more that it needed to be documented.

Apart from my software business, I was a keen photographer, having changed from shooting 35mm SLR cameras to digital in about 2000, after having shot film with them since 1969. My digital shooting had also by 2012, moved on to high quality Canon SLR cameras and lenses.

So in 2012, armed with my trusty Canons and notepads, I began a new adventure.

On arrival, what I saw was not what I expected. It was so much more rugged, more buildings (or what was left of them), and so much work going on.

And so, my education began. I walked a hell of a lot, and carried my heavy gear – dodging the flies (wearing a net simply does not work when trying to peer through a camera viewfinder), and sweating profusely. But I learned… and have continued learning ever since.

I shot at dawn, I shot at sunset, and in between I shot some more! Talked to stone-masons and many volunteers and gradually some semblance of local knowledge grew.

I returned home at the end of the week, and began to realise that I had to DO something with this knowledge and my data. The existing web site obviously wasn’t working, and in fact it hadn’t been updated for a couple of years! And so it came to pass that I took over as WebMaster. Extracted a little that looked useful from the current site, then scrapped the remainder, and started again.

This site continues to grow, and in conjunction with two Facebook pages, reaches viewers all over the world, and excites an ever increasing number of volunteers who want to help. In fact the number applying each year is now more than can be efficiently managed – and in drought years (this year for instance), fresh drinking water is at a premium.

This year (2018) I tried something new. Since I’ve never been able to be on site for more than 2 weeks at a time, and at most I’ve made it for 3 weeks (including a trip for an on-site committee meeting), and I’m also currently having leg problems which preclude long drives, I managed to organise a number of “reporters” to cover all but 1 week of the 2018 project works in my stead.

This allowed us to see the Group operation from 6 different perspectives. Internet access, available for the first time at Farina, has enabled me to be able to communicate with, and download copy from my “eyes” at Farina and post to our web site almost as that news happens.

It must be said however, that I find it a very difficult task to report on this web site completely impartially. In my own opinion, we, as a group, are tackling the maintenance of the Farina ruins in the wrong way.

Instead of stabilising the fast degrading buildings so that they don’t crumble away to just heaps of dirt and rock, we’re either modifying them, or, in fact, replacing at least one of them. The replaced structure (Patterson’s house/Butcher’s shop) has been designed to resemble the original building, however, using modern materials, and having to conform to modern building practices, it’s not fooling anybody!

It will take years for the patina of this building to change to make it appear appropriate in it’s current location. As one of the committee that agreed to go ahead with this building, I apologise to all for my lack of foresight in assuming that the materials used for this build would be more appropriate. 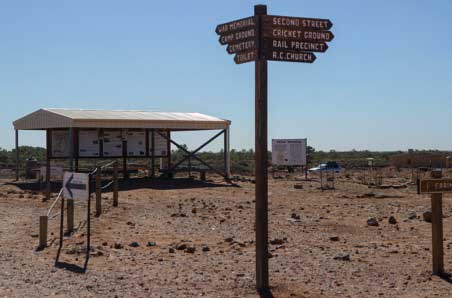 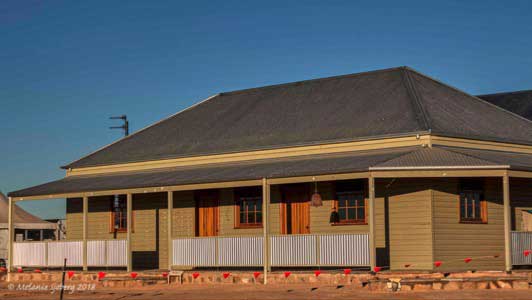 Each time I see it in the Farina streetscape, I realise that although it is a faithful re-creation of the original building (as we know it), it’s ambience is 50 years too late, and it looks out of place!

However! If we ignore my previous negative comments, it should be known that I admire the workmanship and achieved finish of this recently completed (to lockup stage) building.

I also find it hard to accept the plethora of signage telling visitors about the old town, sticking up like so many bus shelters. Sure, they’re easy to see out in the open, but they detract from just the old buildings and the open space that was the old town.

Small low “location” signage is OK, but more descriptive information is better placed inside the buildings, or inside Patterson’s, unseen until the casual visitor does their own exploration.

I’m a firm believer in the “Burra Charter”, where more learned people than us, have laid out what is acceptable, and preferred in an operation like ours. What can be repaired, how it should be repaired or stabilised whilst still maintaining the original appearance and patina.

I believe that we need to transfer our attention back to stabilisation of the original buildings, having first further investigated the optimal method of arresting the insidious salt damp degradation to the building’s footings and walls.

Unless we can find a workable method of arresting the salt damp driven erosion of the old buildings, (one that we can afford), then our hard work will be all for nothing.

I understand that a brief explanation of the re-pointing process is given to volunteer groups before they start working on the buildings, however going on what I’ve been told by one particular volunteer, there was only a fairly cursory explanation, and a significant number of factors were either omitted, or their importance was not emphasised. For instance, the need to fill large spaces behind, and between rocks with smaller rocks/chips to minimise the bulk use of mortar (always the weakest link in the chain), and to ensure that when capping, no depressions are left where water can collect and soak down into the wall structure.

In my opinion, the initial process explanation/training should be formalised and broadened to (say) an hour or more, and some cursory printed handouts provided as reminders of the correct procedures and aims of the job. This is particularly necessary if the ratio of qualified personnel to volunteers increases.

On this last note, considerably more care needs to be taken to limit the number of volunteers on site at any one time to:
control both the drain on local resources (water, amenities etc), and to enable site managers to keep a tight rein on work being performed, and …
that each person involved sticks to the agreed tasks, whilst still being able to enjoy their stay at Farina..

We’ve spent a significant amount of money on re-building the Patterson house. I have suspicions that still more will be spent in the Kitchen of this building, adding equipment and facilities that are supposedly going to be required to produce an ever increasing range of bakery product.

“In the day”, many of these products were virtually unheard of, and certainly never were baked in the original Farina oven. I ask myself “why would we waste hard to obtain funds on baking inappropriate products, when we need so much more to achieve control over the degradation of our remaining buildings?”

I believe that not only are we moving in the wrong direction in the bakery, but why are we applying for, (and winning) funding to run musical events?

The recent Budel concert may not have cost us much, but neither did it earn much. It provided a bit of fun for a small group of volunteers when they were coopted as “background sound engineers”, however, it didn’t seem to progress our restoration work much!

A yet to be determined $5000 concert for next year is, in my humble opinion, unlikely to be a great earner, and would certainly de-focus our attention from the “main game”.

I apologise for being so negative about the state of play, however as I’ve previously indicated, I believe that our group is rapidly straying from the direction in which our constitution says we should strive.